The LM65h's lower deck consists of three main "bodies". The engine room sits at the center. Together with the centrally placed fuel tanks (3), this results in a nice central pivot point for the boat. Also, this set-up creates a neutral trim in all diesel and water load conditions. No need to pump stuff around for trimming purposes. 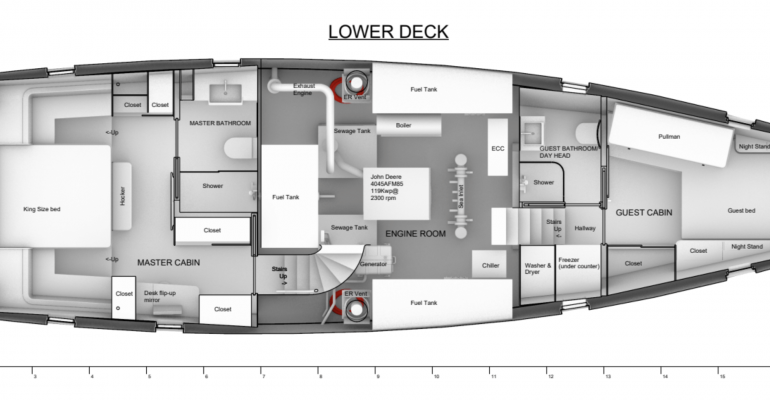 The third main body are the guest accommodations, that sit forward of the engine room. The guest quarters are set-up for a couple or a couple with young kids. It sleeps 4 with a couch, turning this cabin almost in a mini-apartment. Or the couch can be turned into two additional bunks (pullman), one situated above the other. The guest cabin also has its own toilet and shower, that also serves as a day head. The toilet and shower sit between ER and guest room for additional insulation.

The space, opposite to the forward shower and toilet, going downstairs and forward to the guest area, also houses an additional freezer and a washer/dryer combo.

The sleeping quarters are not situated at the forward and aft extremities of the ship. Instead, that’s where the steering (aft) and additional storage is placed (both aft and forward). By not having the sleeping rooms at the extremities, pitch will be less of a concern. We expect that to result in more and better sleep comfort.

The engine room has a wide and spacious lay-out. The idea is that all serviceable parts should be reachable with ease. The easier that is, the less efforts it takes to check, and the better these procedures will be upheld. That’s the idea and thinking behind our lower deck design!

#7: A Deep Dive on Liquid Management!